Taking precautions to prevent tick bites is a daily necessity in many places today. I’ve opted to include insect repellent clothing (treated with permethrin) and judicious application of insect repellent in our family arsenal against these tiny pests, combined with physical measures such as covering the skin as much as possible. 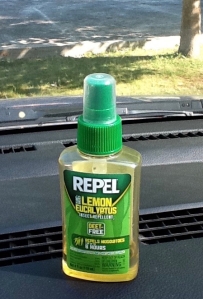 Spring to fall, insect repellent stays in the car

Statistics tell us that tick-borne illnesses—including Lyme Disease in my region—are now endemic in vast swathes of the country. This became clear to me on a personal level when I totaled up the number of kids in my child’s first grade class that I knew anecdotally to have a Lyme diagnosis: six out of 21 kids!

29% of my son’s first grade class had Lyme Disease

We chose schools based at least in part on practices including time outdoors and nature study every day, but one result was increasing the kids’ exposure to a still-expanding risk of infection via insect bites.

In addition to Lyme, other tick-borne diseases include babesiosis, Rocky Mountain Spotted Fever, and tularemia. There are more, and specific symptoms and prognoses differ, but the most important thing to know as an nature lover or outdoors enthusiast is that tens of thousands of Americans are infected by tick-borne illnesses every year. Some continue to suffer ill effects for years.

Infected ticks are a risk to human health in every state in the USA except Hawaii.

Prevention is better than treating a disease

Where simple steps can prevent pain and suffering, I choose to take defensive action. There’s controversy about how Lyme should be diagnosed and treated, for example. I’d rather not have to become a part of that debate.

Here’s how I protect my family:

1) Know the risks & be vigilant

Ticks are found in many regions, but they tend to lurk where leaves accumulate and trees or brush meet open areas. Here in New England, all those charming stone walls are great spots to stop and rest on a hike, but also popular hangouts for ticks.

Ticks have evolved to wait alongside paths for their prey.

Learn where ticks are likely in your area. Try to avoid brushing up against foliage if possible.

Ticks can be active any time the weather warms above freezing. They don’t die off seasonally like mosquitoes do. They are most active from roughly April to September, and their feeding habits vary according to their life cycle stages, but I’ve taught my kids to take precautions against ticks any time the temperature is above 40ºF.

Check yourself and your children after time spent outdoors. Teach your kids to check themselves, too.

Bathing upon returning home is best, though washing isn’t guaranteed to remove ticks from your skin. Close inspection is necessary. Some ticks are as tiny as the head of pin.

Change clothes when you come inside after spending time in tick-likely areas.

If you want to wear lightly worn clothing again without washing, put clothes in a hot dryer for just ten minutes. The heat is what kills the little beasts.

This is so simple, and probably more effective than anything else: wear long pants and tuck them into your socks when you’re in tick-infested areas. Yes, you will look like a dork, but you won’t come home to find a tick attached in one your crevices.

Ticks don’t fly or jump. They linger at the tips of plants, waiting for a likely host.

Once they’re on your body, they climb. The tick finds an attractive feeding spot, buries its head in your flesh, and feeds on your blood. It might inject a glue to hold tighter into your body, or anesthetic saliva to prevent your feeling its presence.

A tick might remain on your body feeding for several days. Longer exposure to an infected tick increases the odds that the infection will transfer to you.

Cover your skin, and ticks will have a harder time feeding off of your blood or transmitting disease.

3) Use chemical repellents in a targeted way

It’s downright ironic that I prioritize buying organic food, but I’ve invested in a set of insecticide treated clothing for every member of my family. I’m concerned enough about the threat of tick-borne infection to take this step. We wear treated clothes when we’re spending significant time out of doors.

Treated clothing comes from many brands, and is often labeled using the Insect Shield® license, but I’ve seen variations on the market like Buzz Off, NosiLife®, BugsAway, or No Fly Zone®. I look for bargains on Amazon or in the Sierra Trading Post catalog since I care far more about function than style for this category of clothing.

For daily wear at school and during outdoor play, I made ankle wraps from commercially available, permethrin treated bandanas. This was far more cost-effective than buying many pairs of treated pants, and the bandanas are easier to find than treated socks in children’s sizes. It also removes the insecticide to one layer further from my child’s skin. 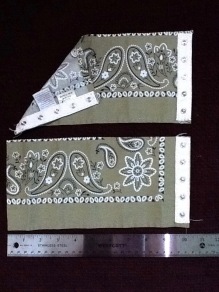 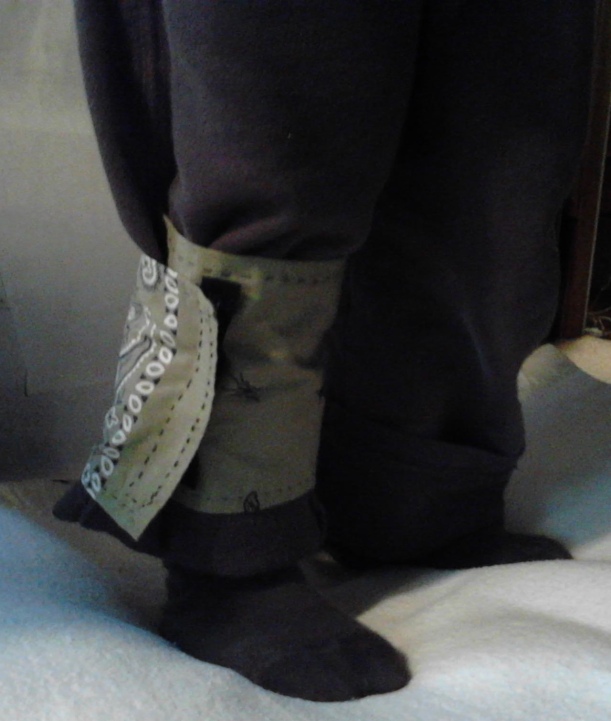 At full retail, one bandana costs $18, and can wrap two pairs of ankles; treated pants retail around $60 per pair and are quickly outgrown by kids. Outdoors, my kids have been instructed to tuck their pants into their socks, and wear the bandana wraps on top of the socks.

One more very affordable option is to buy Insect Shield® socks in a men’s size, then cut them into ≅2 inch tubes (slices of sock.) You can get about eight pairs from one pair of large socks.

Wear these slices as sweatbands around wrists and ankles like a fashionable athlete circa 1980. Dorky again (well, perhaps that’s in the eye of the beholder), but quick to don, relatively cheap, and great for putting a physical barrier right where you need it. These will also hold long pants or sleeves snug against the bare skin to stop crawling ticks.\

I keep insect repellent spray in my car and I encourage my child to keep a bottle in his school cubby for application before recess, if it’s allowed. We use bug spray just on our feet and ankles before we go outside to walk or play.

Kids are usually in a hurry to get outside, so I combine as many of these measures as possible each day. If they miss one step, they still usually have some protection against ticks.

Prioritize whichever measures you and your family are most likely to remember to use every time you spend time outdoors. One of my sons was good about remembering to pull on the “sweatband” style bands; one of them just tucks his pants into his socks before school and is happy to stay like that all day.

When I found a tick on myself one morning, attached/embedded and engorged, and obviously acquired at least 24 hours before, I opted to take a prophylactic dose of antibiotics. Our home attempt at removal squished the tick and therefore increased my risk of acquiring any disease it could be carrying.

This was the only time I’ve found a tick on a member of my family in this condition. We’ve found them crawling on our skin but not attached in other cases.

I also sent the dead tick into a lab at a state university for identification and testing. It cost me $50 out of pocket, but, when the results showed that my tiny attacker was positive for tick-borne disease, I was relieved to have taken the antibiotic.

I might not have become infected without these measures, but they helped greatly with my peace of mind. Keep in mind that I usually take a wait and see attitude before giving any member of my family antibiotics. I avoid medication when possible and try to resolve health issues with rest, diet, etc. I was unwilling to gamble when Lyme Disease was in the equation.

Definitely discuss these measure with your own doctor, but be aware that a single dose prophylactic antibiotic is an option in some circumstances, and ask for treatment if your situation warrants.

I’m also grateful that I took the prophylactic treatment as I’ve since been diagnosed with an autoimmune condition that includes joint pain. I would have wondered more about the potential for chronic Lyme disease otherwise, though my symptoms aren’t a great match for those widely reported.

Even if you don’t take preventative antibiotics, but you later become symptomatic, notes in your medical record about a tick bite could provide a useful clue to your health care provider.

Operas and cycling, and other travels