This was too fun for me to pass up.

Following an idea I read about on Julie Davide – Book Reviews and Other Musings, I put on the “My Top Rated” playlist from my iTunes library with shuffle selected, and I vow to honestly post the resulting list of 15 random songs. 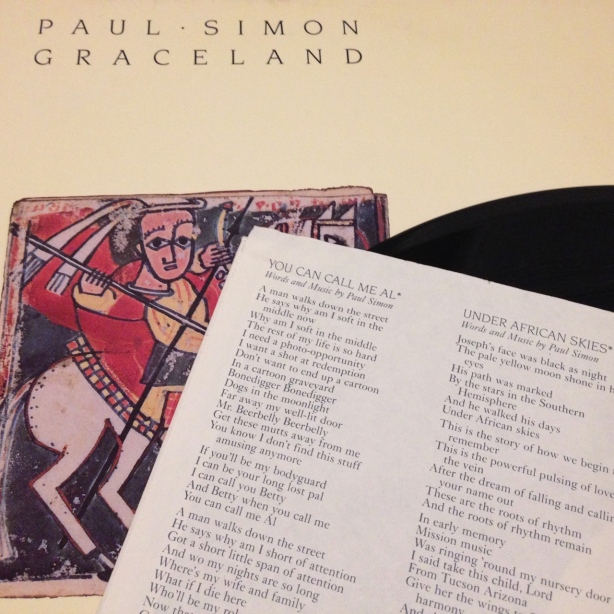 In keeping with Julie Davide’s retro artwork, I pulled out physical copies of albums where I could. Here’s Graceland, by Paul Simon, on vinyl.

I did limit shuffle to this one playlist because, as a parent, there’s a fair amount of “stuff I loaded to please other people” in my library. “My Top Rated” is all music that I’ve chosen for my own pleasure, much of which I can’t even play when the kids are in the car due to mature content…

My results are below this excerpt from—and link to—Julie Davide’s blog.

The Playlist Shuffle Tag Happy Thursday y’all. I’ve seen this tag around on other blogs and decided to join in the fun! I have a feeling that this will turn out quite the array of my musical taste as my musical palette has a wide range. Without further ado, and while avoiding any duplicates, I hope […]

16 Really Wonderful Things that shuffled up from my iTunes Library.

Does anyone else feel inspired to hit shuffle and share their results?

Have we learned anything about our host, author of this blog?

When my teenage son walked past the computer while I was working on this post, he said:

Go ahead and put a little sarcastic grimace in the tone when you play those words in your head; it’s appropriate. He’s a teen. And I, of course, am a dinosaur.

In spite of his teasing, yes, I am writing about my favorite songs. The soundtrack of my life comes from this list, and hearing music that I love takes some of the pain from my worst days.

I think that’s true for most of us.

It’s hilarious to imagine a world, at my advanced age, where I would care too much what anyone thought of my playlist. It does provoke me into making personal revelations, however, and I think that’s mostly a good thing.

I’ll go even further and say it’s a Really Wonderful Thing. Your opinions*** on the subject will be welcome in the comments. What’s the music that moves you? When you hit shuffle, what comes up?

I can’t wait to hear your answers.

*from the album Brave & Crazy

**Personally, the best version of this song that I’ve heard is from her album, Canon. The drum solo around the 4:30 mark is really something. The fact that such a thing is obvious to a musical know-nothing like me pretty telling.

†From the Tank Girl soundtrack, best song on which is the ringing instrumental “Ripper’s Sole” by Stomp

***if they are reasonably polite