A walk in the park…

I meant to endure the walk through Hagley park—a virtual ghost town compared to our first stroll here on the sunny afternoon of our arrival—before ducking into the adjacent Canterbury Museum and out of the rain. That’s what all the other tourists seem to be doing. 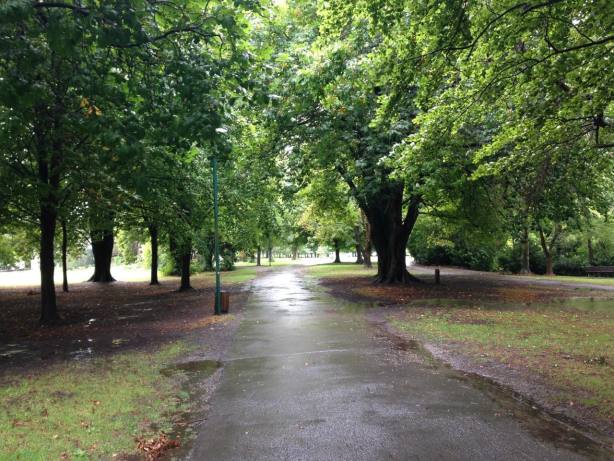 I pass only one other pedestrian as I cross the the park from west to east on my way from our lodging at the Roma on Riccarton Motel.

…and in the Christchurch Botanic Garden

In spite of the rain, or perhaps because of it, the patinaed garden gates beckon.

I’m grateful that I took to heart the most common piece of packing advice I heard for New Zealand: bring a rain coat in any season. My 20 year old REI Gore-Tex jacket continues to serve me very well.

The Armstrong Lawn opens out near the entrance to the museum. Dripping flowers and hopping birds catch my eye.

I wander over to snap a photo of the dolphin† fountain before being tempted along by a glimpse of the Curator’s House. It’s operated as a cafe now, but a charming structure put to any use. 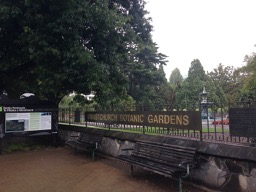 Next to this is a beguiling kitchen garden, leading to a peek at the Avon river, and even more avian species. I realize that I can’t resist walking through an arbor. I pass through each as I encounter it, letting them dictate my path through the Botanic Garden. 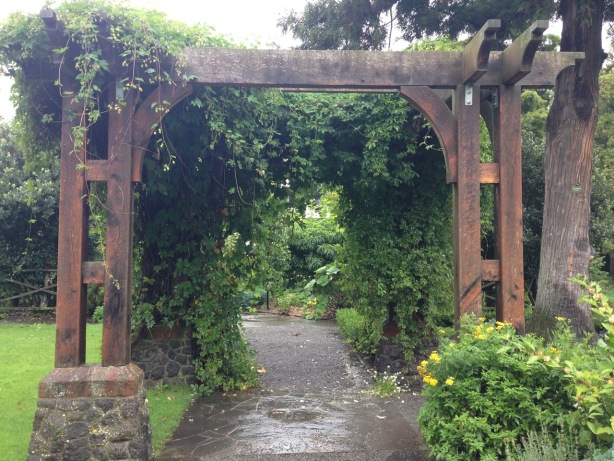 The river is taking up more than its fair share of the park today, but the ducks enjoy that fact.

So does a small, blue heron. He appears to be waiting for something as he stands in a protected patch of grass behind a fence; it might be brunch, or the departure of the men preparing a stage for some upcoming event.

I know very little about birds, plus have poor eyesight and limited patience. In spite of this, New Zealand makes me seriously consider taking up bird watching as a hobby. It’s simply teeming with interesting winged creatures.

Birds in the rain keep busy nabbing worms on the crawl from flooded soil, bathing in the puddles, and napping with heads tucked neatly under wings. 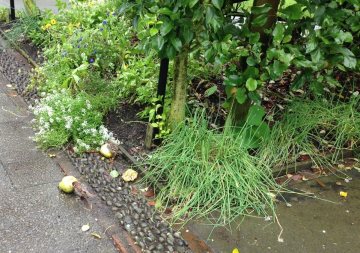 I can’t give you the names of any more of these feathered friends, but it is often the tiny “city birds” dining. Two of them would fit in my hand if I could coax them out of the bush. I call them Two-in-the-hand birds for the rest of my time in Christchurch.

Small-medium sized dark birds with bright yellow beaks are everywhere but much too quick and cautious for me to take a nice picture. I observe that some species of bird tend toward greater fear of me than others; there’s a pattern to which types scatter immediately and which hold their positions while monitoring my approach.

I encounter at least five distinct types of duck. These flock birds are the most frequent nappers, employing their numbers to watch for threats down the line. I watch a ripple of notice flow through a line of dozing waterfowl as I walk by on the garden path.

Most of the ducks—and the largest groups—are a light brown color and look common to my foreign eye. There are also smaller, darker ones, brown ducks with blue tips on their wings, and what I’d hazard to guess are mallards who have green heads and rings around their necks. Oddest of all are colorful ones with a snow white head. A pair of these are the ones I caught bathing. My photos don’t do justice to their beautiful wingtips as I never snapped one shaking out his gleaming feathers. 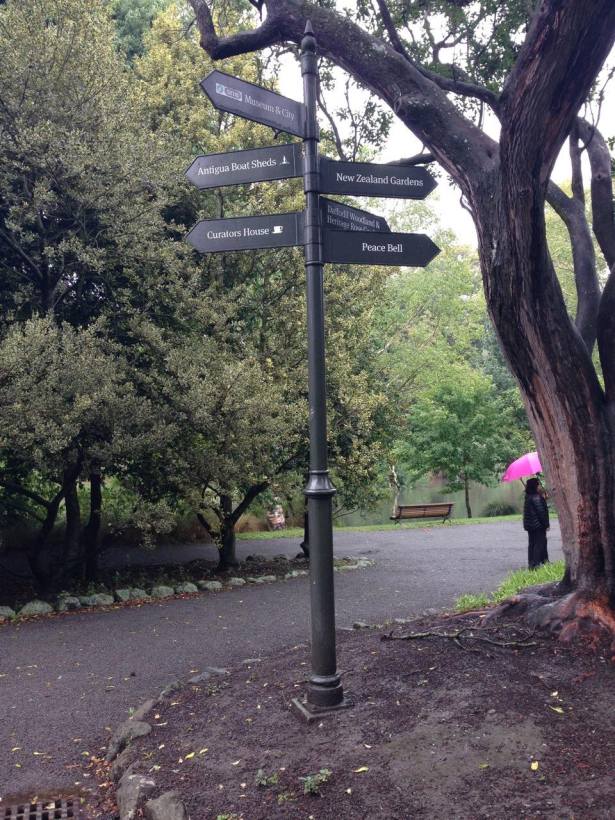 By the middle of the garden, the plants are growing in a more natural looking forest setting. Without any arbors to lead me, I take instruction from another man made object: the signpost. Since I’m here for the first and perhaps only time in my life, I opt to wander toward the New Zealand Gardens.

I’ll be honest, though: I’m not too worried about which path I take. At every fork, I take the narrower, darker, drippier choice. I go where the fewest tourist sounds ring out. I try to take “the one less traveled by.”

Sadly, the first not great coffee of my trip occurs at the Ilex Cafe in the Botanic Garden near the central rose courtyard. 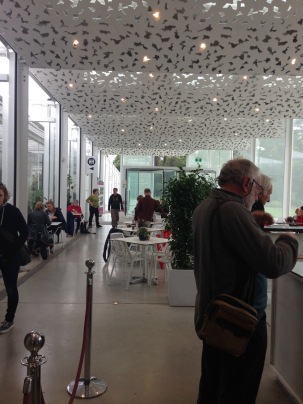 The service is nice and competent as always in New Zealand. The facilities are clean, modern, bright, and comfortable. The convenience of its mid-Garden location is perfect on a chill wet day. The young Barista, however, could use more training. I see upon receipt of my flat white that the foam isn’t silky, and the flavor is a bit scorched.

The cheese scone, however, is quite good. When someone else takes over the espresso machine before I leave the premises, I wonder if I might have hit the better barista’s own coffee break or something. Drink here at your own risk, or let me know if you have better luck.

The cafe’s view into a grower’s workshop for the gardeners is both beautiful and relaxing. I also enjoy a respite in a nearby nook with soft chairs where one can listen to recordings of New Zealand birdsong. I think over 30 species are represented on the tape. There is a small educational display as well, but it is less interesting to me than the landscapes outside.

The gift shop is also in this large, white building, officially designated as the Visitor Centre. I pick up a “build your own” wooden tui bird kit for my younger son. It isn’t quite a toy, but makes a nice counterpoint to the Metal Earth kit I’ve already purchased for my teenager. Assembling it should be fun yet approachable, and the finished figures are lovely, simple decorations once completed.

Since I’m on foot today until DH is done with work, its light weight is another selling point. My Tom Bihn Large Shop Bag–manufactured in rainy Seattle–does a solid job of keeping my purse and packages dry, but I’ve tucked everything into plastic grocery sacks, too, for added protection. It’s just an open topped tote, after all, not a magical vessel, and I’m not letting the weather dictate my activities today.

The sun starts showing its face after my tea break, illuminating the well watered gardens with a new light. I’ve made a loop now and find myself near where I started, chilled and a bit footsore but also relaxed by a wetter than average forest bath.

I head for the Canterbury Museum as the masses are expelled into the afternoon’s brighter weather. It’s deserving of its own review, so I’ll just add here that admission is free, making a short visit late in the day an easy decision for a soggy, slightly chilled traveler who’s spent the morning out in the rain.

Note: Most of this was jotted down “live” on the day of as I wandered–and rested–in the Botanic Garden, hence my not-so-typical-for-me usage of the present tense. Feel free to respond to the change in tone in the comments!

†Officially, it is the Peacock Fountain, but it was the dolphins that caught my eye.

5 thoughts on “Christchurch Botanical Gardens and Ilex Cafe: a bevy of birds and 1 bad barista”