Carnival: fun for all, all for fun?

I knew going in that I was not a good fit for the typical Carnival Cruise Line demographic. Carnival bills itself as sailing “the fun ships.” Frankly, I’m not sure I’m an easy match for any commercial demographic slot, but easygoing party animal perhaps least of all.

I am an unabashed introvert. I don’t like crowds, and I don’t like noisy environments. I don’t listen to popular music, I hardly watch TV, and I’m not “fun” in an obvious way. I don’t participate in most of the activities I see online listed as features of Carnival itineraries.

So I came to my first cruise, aboard the Carnival Glory, fully aware of all this, but willing, for several reasons, to go along for the ride.

Childhood fantasy of The Love Boat

First and foremost, I’ve wanted to experience an ocean cruise since I was a very young child watching The Love Boat with my mother. I yearned to travel even then.

Oh, how romantic cruising seemed, hearkening back to the halcyon days of ocean liners plying the seven seas. Glamorous evening wear? Officers in uniform? Exotic ports? Yes, please! Thirty years later, I finally made it to sea with my own little one in tow.

Another simple reason I opted for a Carnival cruise, in spite of reading descriptions that made it sound like the least appropriate line for me, was simple economics. Carnival Cruise Lines sells a mass market product at a value price.

After taxes, I paid $83 per person per night, and that was for an ocean view stateroom, not the cheapest inside cabin. This departure left from a city near my home, making it all of $3.50 in tolls to get us to the port, plus 10 miles’ worth of gas, wear, and tear on the car. A four night voyage from my home port was a very inexpensive way to try cruising.

Finally, I wanted to take a short, inexpensive voyage with my youngest son because I have big plans for grand, trans-Atlantic adventures… but my little guy has been known to get motion sick.

My husband suffers greatly from seasickness, and I feared our son would follow in his vomitorious footsteps. This was an ideal way to test the waters, so to speak. We actually stayed close enough to home that I could have gotten him home via land if he had been constantly and/or violently ill. Thankfully, that didn’t prove necessary. 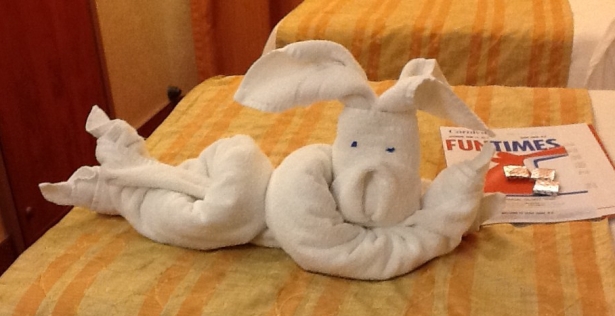 Good times were enjoyed by all

I realized something interesting on this brief journey.

For all my disinterest in the contents of the daily Fun Times newsletter, I found myself more open to appreciating the enjoyment of others than I thought I might be. The overall vibe of the ship was happy and positive, and the revelers were generally inoffensive, even to my different and rather delicate sensibilities.

It was good for me to sail in this particular environment; it expanded my tolerance for living and letting live. It wasn’t even painful.

As an example, I am an early riser. It was patently obvious that most aboard the ship stayed up late, and the itinerary reflected that. I enjoyed the quiet and solitude of the early morning upper decks. I found the normally roisterous Lido cafe practically empty when I went searching for my first cup of tea of the day.

The gym didn’t even open until 7 am on our first day at sea. I exercised while it was sparsely populated, taking care of my physical needs and simultaneously recharging my emotional batteries, which are depleted by casual socializing.

The flip side to this was hearing some hallway noise at night, long after I’d retired for the evening. I was wise enough to bring earplugs, however, mitigating the intrusion. I also noticed that, while noisy, the tone of the late night noise remained happy, playful, and relaxed.

These were not the boisterous drunks I feared, at least on 2-aft, even-side, this particular voyage. I never heard angry or raised voices on the trip. I never found myself uncomfortably surrounded by people who seemed out of control, which was my major concern before setting sail.

Aside from a few minutes waiting in line to re-board the Glory after our port day in Saint John, NB, Canada, I heard less crude language and profanity than I have on the MBTA (subway) in Boston. People seemed to enjoy their good times in an overtly inoffensive, family-friendly way.

I’m not a heavy drinker, and it was obvious that there was some serious social drinking going on around us. In spite of that, I didn’t need to shield my young son from much of anything—again, excepting the drunk young men re-boarding in Canada. Beer, it appears, is no good for washing out a potty mouth.

I took my little guy to All Ages Karaoke and discovered that he loves to dance. He developed his now signature break dancing inspired style by imitating an enthusiastic young man on this trip.

We sat together in a lounge next to a crowd of happy, celebratory, middle-aged ladies with a table full of empty glasses, and everyone smiled at her neighbor, enjoyed herself, and kept up the friendly vibe so we could all enjoy the space together.

I learned a lot about my youngest son on this trip. He was born the most gregarious member of our family, but, until I saw him blossom in Glory‘s atmosphere of non-stop conviviality, I didn’t fully appreciate that his need for socializing was at least as great as my need for solitude. It was a teachable moment for me.

This itinerary on the Glory was a nice cultural melting pot as well. I think my child saw more racial mixing—at dining tables, in the pools, in the bars—than he normally does in our predominantly white neighborhood and school. On this trip, he played simultaneously with children from multiple countries. That was great, and not something I’d expected.

More cruising in my future

I hope to do more cruising in the future, and I suspect I will end up preferring a different cruise line. I’m looking forward to trying a smaller ship with a quieter, more traditional vibe. But, I would no longer automatically discount Carnival as “the least attractive” option for my family.

If I sail Carnival again, I’ll book a larger suite or a pair of staterooms for my family. Three of the four of us would be inclined to spend a fairly high proportion of our time in the privacy of the cabin. We simply need more “peace and quiet” than the Glory’s public spaces provide. I think we could afford to do so on this line, because the prices are relatively low.

If I ever convince my husband to try cruising, it could be aboard a Carnival ship, and I wouldn’t consider it “settling” if it was. I also believe that an inexpensive Carnival sailing can make a good test voyage for novice cruise vacationers who are considering a more expensive trip but reluctant to commit for fear of seasickness or claustrophobia.

You may find, as I did, that you are pleasantly surprised by Carnival Cruise Line.