I’ve noticed that I often bring up in conversation one or more of the fascinating books I’ve been reading lately, only to fail utterly at recalling titles or authors’ names. I’ll take this opportunity to at least have a handy reference available for anyone who cares to follow up on something I’ve said. 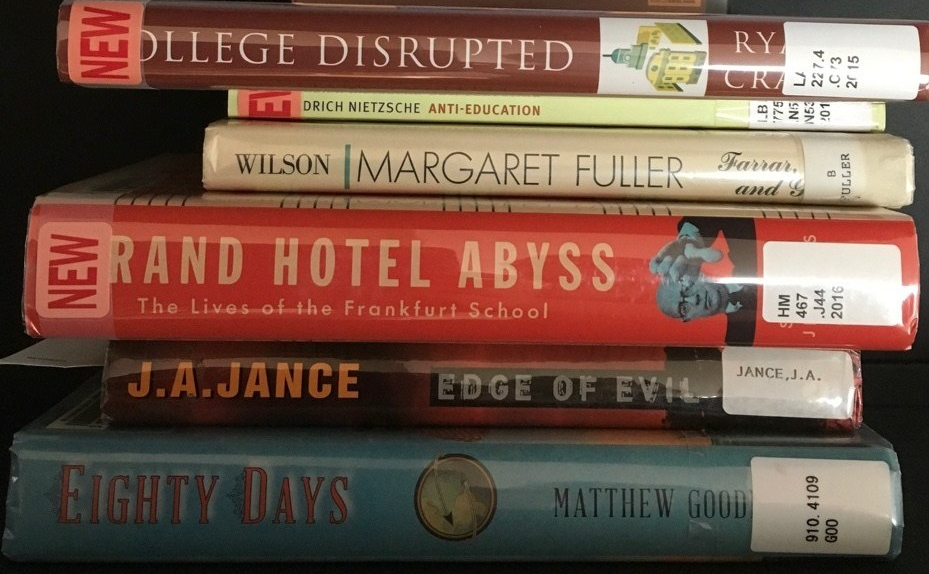 The Art of Worldly Wisdom by Gracián, Baltasar

Churchill & Orwell: The fight for freedom by Ricks, Thomas E.

Grand Hotel Abyss: The lives of the Frankfurt School by Jeffries, Stuart

Life of Fred: Pre-Algebra 0 with Physics by Schmidt, Stanley F. 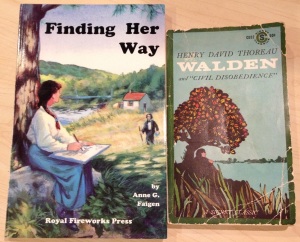 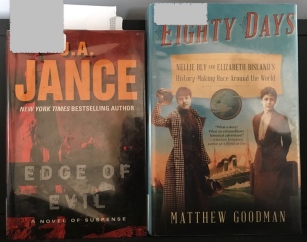 Anecdotes of Destiny by Isak Dinesen

Edge of Evil by Jance, J.A.

Finding Her Way (YA title) by Faigen, Anne

M.C. Higgins the Great by (YA title) by Hamilton, Virginia

The Odds of Loving Grover Cleveland (YA title) by Rebekah Crane*

I’ve been reading a fair amount for two disparate reasons.Feeling less than great means more down time. The up side to down time is more time to read.** Contrary to most recent experience, it is not my wrists aching for the moment, so I can hold up a gosh darn book unimpaired. Fascinating content is a great distraction from the trials and tribulations of the weak stuff that is my flesh.

Aside from that grouchy reality, Labor Day cometh followed by the official start of our new academic year.

That point is true for my traditionally schooled child, but less accurate for our home school. We actually go year ’round, and we begin our new records as of July 1st. Why? It happens to be very motivating to my home scholar to earn the chance for shorter work weeks during “the school year” by putting in hours over the summer.

I’ve only re-read parts of Walden this week, but felt it deserved a place on the list as it has triggered all kinds of digging into other sources on Transcendentalism for a “unit study” on the subject.

I find Thoreau hard to resist when his work is in front of me. I greatly enjoyed Walden in my youth, and I can appreciate it with a mature perspective as an adult. His writings are powerful, but his nature studies are also admirable. The blend of this book in this season at this place is irresistible to me-as-schoolmarm.

It is all new for me again in part because I now live in New England. I grew up out west.The region shines in Autumn. Visiting Concord, MA—the heart of Transcendentalism—and Thoreau’s Walden Pond is a very real possibility, and could bring a lot of life to this particular unit study for my young teen.

I’ll be honest. I love a field trip, too.

DS1 just happened to select Walden from the shelf of options that qualify as “English free choice” books. He’s supposed to be reading something from this shelf at all times. Sometimes we study a title extensively; sometimes he merely bases a writing assignment on one and we move on without discussion.

Confession: this aspect of our curriculum is highly correlated to our whims.

I think DS1 sees this as one of those cases where I’m running amok. I’ve put a lot of intellectual energy into Transcendentalism this week.

In an interesting aside, I’ve found myself mentioning Walden and its place in local/American history with one Russian born friend and another from Poland. Having been educated in Europe, neither of them were very familiar with this (to me, at least) extra shiny bit of Americana. I hope that, if they follow up with any of my suggested readings, the content proves as universal as it feels to me.

In a final, and perhaps rather plaintive note, here’s something I’ve observed:

I’m not enjoying my favorite genre of light fiction anymore.

I was raised a mystery reader. It’s one of those things my parents have in common (with each other) that I saw as an inheritance (for myself.)

It’s true that watching television mysteries was something I did with my mom, not both parents, but we passed paperbacks between us during all the years I was too surly to share much else with them.

Where I used to follow the threads of literally dozens of serial sleuths, I’ve dropped all but two particularly skillful authors from the forefront of my awareness. When I picked up an old favorite’s newest entry from the library, I took it back half finished. It didn’t hold my interest.

Have I lost my taste for murder and mayhem?

Am I too dignified and refined for bloodshed and whodunnit?

Is this part of growing up? Or growing old?

If mysteries aren’t satisfying my intellectual sweet tooth anymore, what the hell am I going to read on planes?!?

*Free “Kindle First” book from Amazon for being a Prime member

** I love the meter of that sentence! If I had an army, that would be our marching chant.*** Perhaps one piece of evidence for why I have no army of my own?

***Naturally, there’s a word for that: a cadence. My army would be attempting to shuffle along in formation with noses pressed firmly into books, of course. We would become world renowned for it. A sight unmatched in martial history!