Read about our celebration of Night 6, here.

I’ve learned over the years that more gifts can lead to less joy, at least for my not so little boys. Spacing out the individual presents helps, and so does avoiding too many extravagant gifts at the same holiday.

This has been one of my hardest parenting lessons to internalize: don’t overwhelm the kids with gifts that attempt to quantify your infinite love.

I like to make our Eight Nights of Hanukkah Gifts things that we can enjoy as a family. I also try to alternate bigger impact gifts with simpler pleasures, and spread out amongst all eight nights the presents I believe will most please different members of the family.

Yes, that’s right: I had a plan all along. Could anyone who knows me think I just wrapped this stuff up and grabbed boxes at random to throw at my family? There’s a spreadsheet, of course. It’s all about the pacing.

Night seven was one for simple pleasures, and enjoying what we’ve already got.

The boys opened two boxes of additional Lego train tracks (Flexible & Straight Set 7499 and Switching Tracks Set 7895) for our Winter Holiday Train and its Station. You’ll want to begin with Nights 1 and 2 to hear more about those.

We spent the rest of the evening building circuits and inventing ridiculous scenarios for the minifigs and trains on the table.

I thought about providing the track right after the train, but this seemed to be a better plan. For one thing, we often but not always get a set built in one evening. Why rush the extra track onto the scene if the train wasn’t ready to roll?

More importantly, my little guy has had several days of marveling over the Station’s details and pushing the train up to the platform on its simple loop of track. Each time he immersed himself in the scene, he became more aware of how much he would enjoy expanding it and connecting it to another part of his imaginary world.

He’s been musing to himself for a few evenings:

Now, he can make that happen, and he’s ready to put in the effort to make it happen with no other distractions for the evening. The boys even dug into our existing Lego sets and pulled out an older, motorized train Grandma bought for a Christmas past.

This led inexorably to the aggressive shunting of steam engine and holiday trucks by a Diesel locomotive. Shades of the Island of Sodor, anyone? If you don’t get the reference, commence reading the Reverend Awdry’s Thomas the Tank Engine immediately.

Switches make the train go ’round. 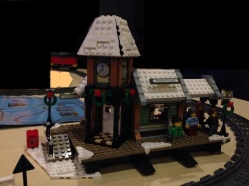 “We’ve been waiting since Tuesday”

A few pieces of track don’t make an extravagant gifteven at Lego prices, but today it has an immediate value to my younger, somewhat more materialistic son.† He also receives the gift of a modest object that gratifies his imagination above all else.

Too many toys are too easily forgotten in the chaos of more, more, more. The right accessory on Night 7 served to reignite all the excitement from those first, bigger gifts.

At least, that was my nefarious plan, which will be discovered if my kids start reading my blog.

Stay tuned for the final night of Hanukkah, Night 8.

†The big kid just loves to build. He always sees the value in a gift of parts to expand on a modular set. The trick with him—and, it must be noted, with Mommy—is to remind him to graciously allow the younger child to assemble some tracks and learn for himself why symmetry and careful planning are so important when it comes to engineering a system of moving parts.

We didn’t mean to make the little guy cry! Sigh. And, eventually, he did get to play, too.

2 thoughts on “Hanukkah family fun, night 7: Making tracks with a small gift that has an outsized impact”

Operas and cycling, and other travels