I always travel with a light, at least a small flashlight,* but more often a mini lamp capable of rendering a strange hotel room safe for use late at night.

Pictured are similar keychain flashlights and rechargeable, motion sensing LED light bars like those I packed on my last trip.

My reasoning is fairly straightforward. It’s only happened once, but I was on a flight where the overhead light in an airplane lavatory went out in mid-flight. You can imagine how gross an unlit restroom in motion could become, so I’ll say no more about that except that now I always carry my own source of light.

I’ve had similarly unexpected needs for my own method of illumination in a retail store back room when an unreachable overhead bulb burned out, and when caught outdoors in nature after dark. Stuff happens. Life with reliable electric light is decidedly more convenient!

Travel lights, like electronics in general, have undergone more evolution during my adult life than almost any other item routinely packed.

We are all also carrying more chargers for electronics, but they aren’t much different from those that powered the much bulkier Gameboys and Walkmen of my youth. The wall wart might be a bit smaller, but plugs and cables remain fundamentally the same.

When I was a child, there was no reasonable way to fully illuminate a campsite–or a hotel room–without burning fuel or carrying an battery-powered flashlight the size of a large hardbound dictionary. Our old fluorescent lantern—the cutting edge technology of its day—didn’t even use standard batteries (AA, C, or D) most of us keep at home. It used these 6V behemoths which are the size of a cup of coffee but much heavier.

Booklights were common by the time I was a teenager. The popular Itty Bitty Book Light original used incandescent bulbs (breakable, and likely to burn out within the product’s useful life) and AA batteries. It looks like this model is still in production by Zelda!

I always packed extra AA batteries and a spare bulb when I traveled for more than a day because devices devoured them in short order. You could go through dozens of AA batteries per day if you listened to hours of music on a portable CD player.

I got the wondrous gift of a fluorescent book light** in college. The lower power requirements meant I could safely leave home without additional AA’s. The light itself was bulkier, however, than the incandescent competition. It was about the size of a two decks of cards side by side when folded flat. Its clever Z-folding design did mean that it could stand resolutely on a night table, not being easily upset, and work as a mini bedside lamp.***

I note the self-supporting feature because, even before I developed arthritis in my hands, I didn’t enjoy the excess weight of a lamp clipped to a book. I dislike the off-balance feeling. 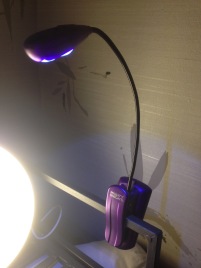 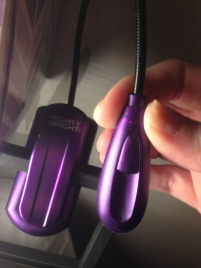 Though I use a 15+ year old, battery powered, dual LED Mighty Bright booklight even at home for late night reading (insomnia, sigh!), I constantly fiddle with the aim of the beam, and I’m often left feeling peevish about the experience. This particular is about equal in value to my greater comfort with the lighter weight of my Kindle Voyage in making e-books my bedtime favorite format.

If you don’t travel with any sort of light, I’d recommend carrying a tiny button-cell battery powered flashlight, at least. They cost about $5 and are smaller than your little finger. You can spare the weight and space.

For those frequenting hotels or traveling with kids or partners who fumble for the toilet late at night, the motion activated feature on a mini light sporting three to 10 LEDs provides a lot more service in just a little more space. Mine’s roughly the size of a candy bar, but weighs less. It has a long lasting rechargeable battery.

Often, these rechargeable units use the same standard mini USB cable as a Kindle or phone, requiring no further accessories to pack. My light rarely needs recharging during a typical one week trip. I’ve repurchased similar bar lights on Amazon, with none of the specific models still available as of this writing. They work well in the home, as well, for spots where no convenient outlet allows for a traditional plug-in nightlight.

How do you illuminate your travels? Or am I just more afraid of the dark than the average voyager?

*Actually, I keep a tiny flashlight in my handbag at all times and I add an LED bar light for travel. I really don’t want to be stuck in the dark.

**No longer available to purchase, but you can still view the venerable Phorm Light Voyager on Amazon.

***Carrying a standard flashlight would also be an option, but I don’t enjoy the act of reading while I’m actively training a focused beam on the page. Perhaps if I’d read under the blankets with a torch, like all the bibliophile kids in stories I enjoyed growing up, but my parents were very lax about bedtimes so long as I was in bed and reading. I just used my standard bedside lamp late at night!