By school pick up time—around 2:30pm, so hours before many people even think of finishing their days—my reservoirs of energy are nearly empty. What used to be an afternoon lull is more often, now, my afternoon collapse. It’s the most persistent and insidious symptom of my autoimmune condition.

The work of a stay-at-home mom may include some flexible hours, but school pick up time is not among them. The kids are done when they’re done; someone needs to go get them. There are a few dads driving up in the daily rotation, but most chromosomes in the car pool lane are XX.

Outdoor “play equipment” doesn’t have to be expensive or complex

One of the things I like best about my son’s school is the emphasis placed on time spent playing and learning outdoors. They aren’t quite as adamant about it as our preschool was—there, kids went out, rain or shine, unless there was a truly bitter freeze or risk of lightening strikes—but the value of free time, active play, and exposure to fresh air and sunshine is respected.

So, while I’m often running on fumes by 2:30pm, I bring a book, I pack a thermos of tea or an appealing snack, and I just generally prepare myself for a comfortable wait so my little guy can stay longer with his friends and play even more after school. It may only be a half an hour, but what a precious 30 minutes for a kid.

I’ve read that child’s play is currently endangered. I tend to agree that this is a grave loss for the kids in question and society overall.

On a beautiful spring day, it isn’t much of a sacrifice to allow this time for my child to release some of that seemingly boundless energy. My arthritis doesn’t flare as often on moderate days, lessening the cost of pain. In the absence of rain, I can move around and avoid getting stiff from sitting in the car. I get to socialize today, too, with other moms and some lingering members of the school staff, all of whom take advantage of the beautiful weather to linger outside.

DS2 and his knot of friends are involved in a complex dance of running, falling down, enacting simulated agonies, then jumping up to do it all over again. Some of the girls join in at times, weaving themselves into the game, then drifting away to huddle under a different tree, whispering their own solemn secrets. They start a new adventure by climbing a large, horizontal tree. 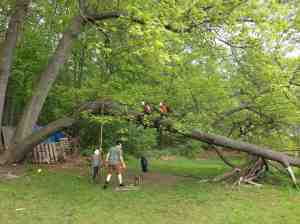 An admittedly awesome tree, some string, and a lot of imagination sparked this adventure

“Watch out for that poison ivy,” they advise me when I come closer to take a picture. After confirming I’m not there to take my son away, they quickly re-submerge in their play. They stop only when a preponderance of mothers appear, all ready to go home.

There seems no possible sweeter moment for me, as a mother, than this one, until later, after a tick check and bath, after dinner, after fun, when the little guy is lying asleep nearby and I’m restless and reflective. His breathing is deep and even with no sign of the nocturnal asthma that sometimes harries our nights.

No doubt the fresh air and tree climbing contributed to his deep, peaceful slumber, even as the memories of the same disrupt mine.

He’s so big, now, my little boy, but still so very small. My love for him swells in my breast like a wild thing rearing up to escape its confinement in a cage. It is ridiculous how much I adore this child. I’ve always found it easier to really notice this while he’s quietly sleeping.

The night air drifting in the window is still soft and smells of spring. Many hours remain for slumber, and there’s more play in store for tomorrow. It’s time to tuck this unbridled passion for a silly little boy and his winsome ways away, and attend to my own dreams.