This long overdue post has to begin with a Monty Python quote:

My long silence can be explained by a lot of stuff happening In Real Life, most of which isn’t really my story to share. Suffice to say that a close family member is dealing with a major health crisis, and enough of my assistance has been required to eat up much of my free (a.k.a., blogging) time.

I may have used what remained to play my favorite video game, The Sims 3. I’m not proud of the hours I while away in Riverview or Hidden Springs, but I do appreciate the diversion. I’m absolutely susceptible to the siren song of oblivion in a virtual world!

Major upheavals in the status quo of one’s family dynamics can be profoundly disconcerting. I’m grateful that my current situation is allowing me time to reflect upon what’s happening with my loved one. I’m also wrestling with the reality that some of life’s conundrums never get resolved, no matter how much will one side brings to the table.

The only real option any of us has is to face whatever comes and do one’s best with each situation. Other people will just keep having opinions, personality quirks, and issues of their own. The privilege of reacting appropriately in spite of all that is granted to every one us, over, and over, and over again…

Time marches on, and we will go with it. If we’re lucky, we keep step. Sometimes, we’re just kicked along underfoot to arrive at the future disheveled and in a state of shock with Time’s bloody boot prints on our backs.

I find it best to focus on having made it this far, after all. Kicking aside, it beats the alternative of having no life left to suffer, or enjoy.

May 2019 bring you and your family good health and every happiness!

I never use one word when one thousand will do, so, naturally, I will elaborate.

As if winter’s lingering darkness and New England’s coldest temperatures in years weren’t enough, we have to add widespread influenza infection to the list of legitimate complaints for still nascent 2018.

If my local children’s librarian* is to be believed, our corner of our state is the hardest hit in the area with this more-severe-than-average flu.

My situation isn’t even so bad. We are a house divided: only one of us has flu. I’m hunkering down with the sick one while DH keeps his distance and manages the healthy one. They leave us trays of food outside the door and occasionally send word about the outside world. 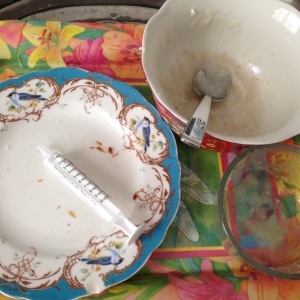 The good news is that we have space enough to almost completely quarantine the sick kid. He hasn’t been downstairs for several days. Our over-the-top 1980s house came complete with a wet bar in the spacious master bedroom; between the mini fridge and the microwave, I can cover most of our needs without venturing forth myself.

We’re also lucky that the vicious cold spell is over. I can crack a window for ventilation between the child’s Petri dish of a nest and my frequently wiped down seat on the other side of the room. He isn’t lonely, and I haven’t caught the Plague yet. The separate heating zone for this room also assuages some of my guilt about sending so much heat literally out the window.

The bad news is that it’s the kid with the underlying condition making flu particularly dangerous that caught it.**

The doctor didn’t even want me to bring him in, citing the risk of exposure for others. He called in a prescription for Tamiflu and told me to plan on spending four to five days at home. The drug is the best thing medicine has got for reducing flu symptoms, but it only knocks half a day or so off the illness’s expected duration. 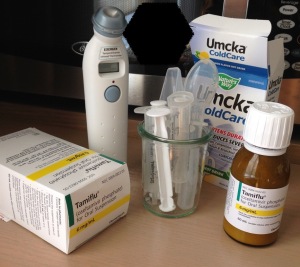 Since the only side effect we’ve noticed is mild nausea and the evidence suggests Tamiflu reduces my son’s risk of hospitalization, I have no regrets about following this course of action.

An interesting aside: my husband’s doctor recommended getting the nasal swab flu test, but the pediatrician did not want to risk exposing others at a medical facility. DH’s internist would also have prescribed Tamiflu as a preventative to the rest of our household. The pediatrician did ask if my other son needed an Rx, too, but didn’t suggest Tamiflu for the adults.

We generally prefer to avoid taking drugs until they are absolutely necessary, so none of the rest of us are taking antiviral medication, but I found the variety of approaches interesting.

I should add here that, though I have a chronic illness, I am not considered immunocompromised at this point. If I were, I would take the Tamiflu without argument; as it is, I will play the odds.

We’ve increased the dosage on my son’s usual meds as directed, and I know the danger signs of severe illness for which I should watch, but the primary treatment for my sick kid is the same as for the rest of us unlucky enough to catch the flu: plenty of fluids and lots of rest at home.

I’m keeping myself sane by the following means:

Wash yours hands often, or use hand sanitizer. Humidify your air if it approaches arid arctic conditions. The influenza virus is weakened at normal to high humidity levels aim for 50% RH***, and simple soap and water or the alcohol in sanitizer are sufficient to deactivate it on your skin before you transfer it to your vulnerable mucus membranes (i.e., nose and mouth, where the virus usually gets in.)

And if you do get sick with the flu, please, stay home until you’re no longer contagious.

Not sure if it is just a cold or the dreaded flu? Call your doctor!

If you’re not willing or able to do that, your best clues are:

When in doubt, stay home while sick. You are most contagious during the first few days with influenza.

If you have flu, you are spraying a cloud of virus into the surrounding environment with every breath. The person standing next to you could have a compromised immune system or a preemie at home.

Keep your germs to yourself. Let’s all work together so that this flu season winds down soon.

*I didn’t ask if she’d used her librarian superpowers to find out this fact, or the same gossip mere mortals employ to assess epidemic illness trends, so that might just be hearsay. As it served my preexisting notions, I just assumed she was correct.

**When I called his school to let them know he would be out sick, I learned that several other children from his class had the same symptoms. Ah, children. They’re the cutest little vectors for disease.