Last year, I wrote about my favorite fuel-free cooking appliances. One of them is a GoSun Sport model solar oven that I use right on the balcony, just a step outside my kitchen. It’s a space too narrow for safe use of a full size gas or charcoal grill even if I were comfortable cooking on a fire.

If you’re anything like me, investing in a solar oven for summer cooking without heating up the kitchen leads you right to the need for an adapted chocolate cake recipe to suit it.

Here’s a peek at one of the mini cakes I managed on my first attempt. 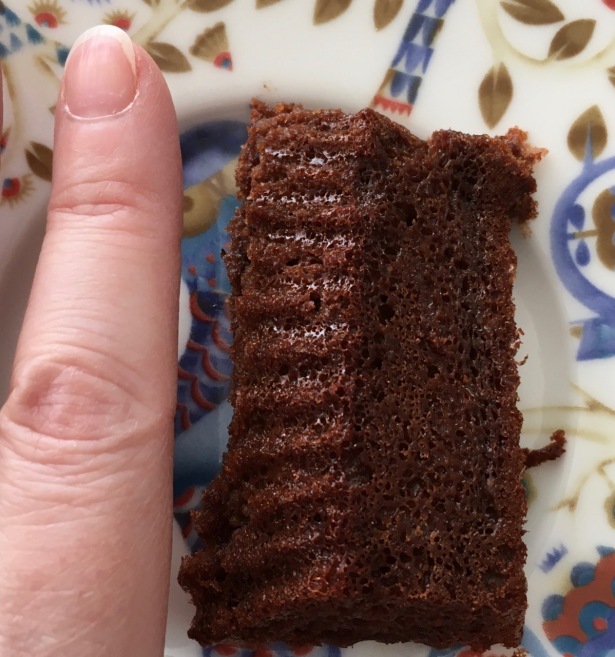 We’re “enjoying” the first heat wave of the season just a few days into meteorological* summer, but the kids and I had a hankering for sweets.

It is 100% accurate that I have questioned the need to ever eat—let alone cook—hot meals once the thermometer reads about 75º F. Sorry, kids! Then again, my interest in baked goods rarely wanes even while the mercury rises.

Observant readers may notice that I forgot to add the chocolate chips to the batch I photographed for this post. The result will be delicious either way.

In a dessert like this, somewhat more bitter, very much more complex cacao nibs would make a great swap in place of common chocolate chips because the sugar in the recipe already offers plenty of sweetness. Try this if you’d like a little crunchy texture. 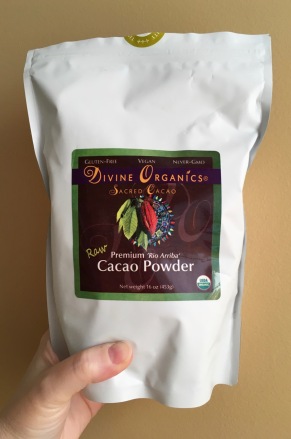 As I often do, I swapped out half of the cocoa powder called for in the original source recipe (linked later) for an organic, raw cacao powder that I like and keep on hand. Theoretically, this adds healthful minerals and extra antioxidants to the end result, and I appreciate the flavor.

The heat of cooking does undermine adding those extra antioxidants, however.

If you’ve never tasted cacao as distinct from more common cocoa powder before, I suggest replacing a smaller quantity to begin with, especially if you’re baking for picky eaters. The recipe should still taste fine with two tablespoons of cocoa powder and no cacao powder if you don’t have any.

DS2 proudly brags that he was the only young participant who liked even the bitter, unsweetened chocolate he was given as part of a demonstration at a Spanish chocolate factory—Simón Coll—that we visited a few years ago, so my family’s palate may more tolerant of bitter flavors than the usual.

Why did I need a new recipe to bake a cake with the sun?

I already have dozens of cake recipes, but it seemed obvious that a standard recipe geared toward a typical eight- or nine-inch cake pan would result in a lot of waste.

My GoSun solar oven has a fairly small 2-3 person capacity, better suited for lunch at home with the kids than a group cookout. I took to the internet for single-serving “mug cake” recipes thinking that was a good place to start.

Would you believe that many mug cake “recipes” start out by calling for a partial box of store bought cake mix? I hate the idea of storing an open, half-used carton!

I stopped buying cake mixes years ago once I’d discovered sources for powdered staples like buttermilk and eggs that allow for pantry cooking with shelf stable ingredients. I prefer the control of baking from scratch, quality and quantity, even though I’m a less-than-enthusiastic chef.

Here’s a link to The Spruce Eats gluten free (almond flour) chocolate mug cake recipe from which I started. I’ve never baked it as written, so I can’t comment on any version except my own.

Why did I decide my first solar baked cake should be gluten free?

No one in my family suffers directly from eating gluten, but we do have a family history of celiac. Also, more than one of us has a diagnosis of different autoimmune diseases. It is not uncommon for someone with one autoimmune problem to be subsequently diagnosed with yet another.

For these health-related reasons—and because eating an excess of even whole grains exacerbates another family member’s GERD symptoms—my default is to bake with almond flour over all purpose wheat flour as a first choice. 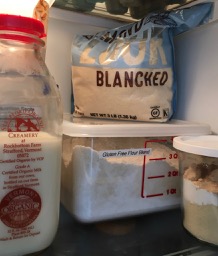 Packaged almond meal might also work well for this recipe, but judge for yourself if the product you have in hand looks finely ground like flour as opposed to coarse grated nuts. I used Bob’s Red Mill brand “Almond Meal” in this case, and the result was nicely textured.

How can an individual “mug cake” recipe make cake for a family?

Using similar quantities to The Spruce Eats original in my adapted recipe, I ended up with just slightly more cake batter than would fit in the seven (7) mini silicone molds that fill my GoSun Sport’s cooking chamber.

I had to use one mismatched round baking cup to best fill the entire space in my oven’s interior. Silicone cupcake molds aren’t standardized as far as I know, so use whatever fits your solar oven best.

It’s worth noting that the manufacturer offers a set of seven (7) silicone mini molds that should perfectly fill the chamber on this particular solar oven. Buying a specialized set might make more efficient use of the GoSun Sport’s relatively small cooking volume, and results will be more aesthetically pleasing than my mismatched cups if you opt for their custom product. 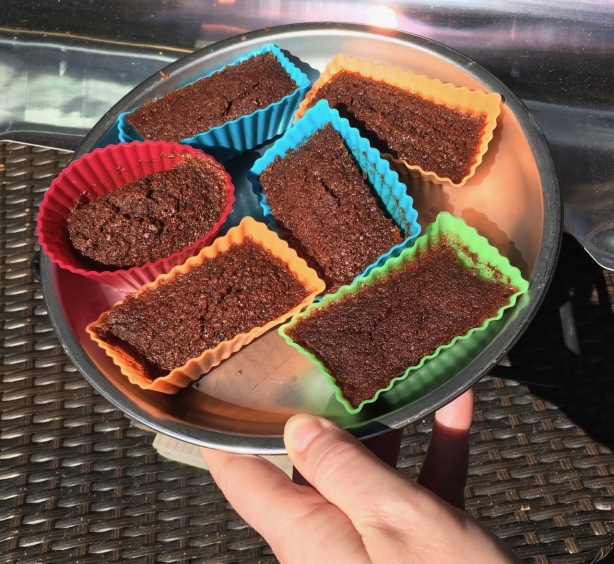 As should be obvious since this is an adaptation of a solo portion recipe for “mug cake” spread out over half a dozen silicone molds for this project, the resultant cakes are petite. I used a ruler to show you exactly how small each cake was. 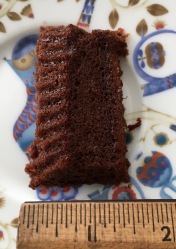 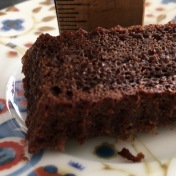 Let’s not pretend that chocolate cake is a health food, but these pint sized versions make a fairly moderate treat. Each one is less than two cubic inches of dessert, after all!

How does this sun-baked chocolate cake taste?

The first cake in the purple silicone dish had already been taste-tested before I remembered to take a picture of the combined results. Luckily, I thought to get a shot of it on the plate before devouring the whole thing.

My family enjoyed this cake very much. The kid who doesn’t even need to avoid gluten says this recipe, “tastes like normal cake.” Everyone liked it.

It’s true that I often bake with a variety of grain- and nut-based flours, so my kids aren’t expecting supermarket sheet cake, but I think it’s fair to say that this recipe doesn’t result in a cake you would only want share with your allergic friends.

When microwaved—at least, in the tiny, leftover quantity I used, which produced a treat similar in diameter to, but much thinner than, a Hostess Ding Dong—the texture of this cake is noticeably gooier (gooey-er?) and a bit chewier than the sun-baked version. 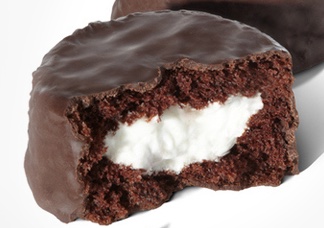 I found a photo of a Hostess Ding Dong on the internet in case the kids don’t know what one is anymore. I thought Hostess went out of business, but I guess the company was revived. Probably bad news for nutrition, but good news according to my nostalgia for packaged snack cakes.

The microwave version would almost qualify as a pudding cake, in my opinion.

If I could ever get away with making a treat for myself alone in this household, I would consider this recipe for a solo mug cake cooked in the microwave as well as baking it in the GoSun Sport.

Cooked in the solar oven, my cake still has a slightly chewy exterior crust, but a more traditional, cake-like crumb. I would rate this as perhaps closer to a cake-like brownie than a light spongecake, however.

I don’t like frosted brownies, for example, yet I think this cake would be great with frosting added. I guess that’s my official line between a cake-like brownie and true cake!

Because of the GoSun Sport solar oven’s narrow, enclosed, tube-shaped cooking chamber, results are generally more moist than the same recipe prepared inside the very dry cavity of a gas or electric stove. This cooking method fundamentally preserves more moisture than a fueled oven.

My seven cakes were ready after about 19 minutes. It was a hot day with full sun almost straight overhead.

Follow the directions given for your sun oven. With mine, the delicious smell of cooked food—baked cake, in this instance—becomes apparent when the meal is almost ready. Another clue with the GoSun Sport is a wisp of of steam rising or a few drops of condensation at the open end of the tubular cooking chamber.

Clean up of the silicone molds themselves is often easier if you’ve greased them. These didn’t require hard scrubbing to come clean in the dishwasher after I made this recipe. A normal dishwasher cycle was sufficient to get the bakeware clean.

I did grease these silicone molds with avocado oil and a basting brush before baking. I don’t always take this step when cooking in silicone dishes, and I think the cakes would have released okay from their forms without that step, but I didn’t test it. For example, if I were camping, I wouldn’t pack oil and a brush for this purpose.

In that scenario, I also would have mixed by hand instead of packing a powered hand mixer.

Another adaptation that would make this recipe better suited for camping would be to replace the liquid vanilla extract with a spoonful of dry vanilla sugar. Here’s a link if you’d like to make your own vanilla sugar.

Swapping powdered egg for the fresh one required in this recipe would bring this recipe very close to “just add water” campsite preparation.

Ready your oven before loading liquid batter for level cakes

I have some trouble adjusting the legs of my GoSun Sport oven by myself due to arthritis in the small joints of my hands. These cakes are distinctly lopsided because the oven went through one particularly sudden lurch while I was pointing it at the sun high overhead.

For more even cakes, place your oven—and get it aimed directly toward the sun—before you slide your dishes full of batter inside. Liquid will find its level.

Because I tipped the oven while it had liquid batter inside, I did have to scrub my GoSun Sport’s metal cooking tube after this recipe. There’s enough oil in this batter, however, to make the required effort not too intense.

Seven little cakes meant that the kids and I could each have a sweet, homemade treat for a couple of days. Would you believe, DH doesn’t really like chocolate? 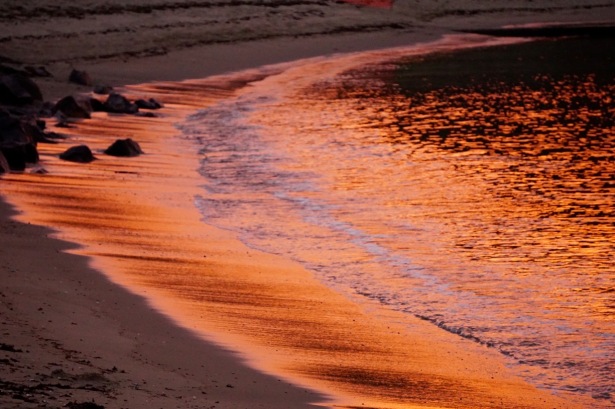 Baking the cake outdoors using the sun’s energy made them a novel bit of adventure, and environmentally friendly.

Adapting this chocolate cake recipe definitely sweetened my first week of meteorological summer. I’d be delighted to hear from anyone else who tries it to hear how your version turns out.

* Here’s a brief explanation of the difference between astronomical and meteorological summer if you’re about to tell me summer begins with the solstice later in June.