The Arteck HB030B Bluetooth keyboard weighs less than my favorite mobile input solution, the Logitech K780, but it also has backlit keys, which the K780 lacks.

My Arteck is light, and it lights up, thus doubly lightening my travel life!

Please pardon that little bit of inane wordplay. I can’t help myself sometimes.

Why buy another keyboard when I love my Logitech K780?

The Arteck HB030B weighs 214 g, simply annihilating the Logitech’s 863 g. In a one bag travel scenario, shaving off 649 g—75% of the heavier K780’s total—can make an appreciable difference to my carrying comfort. 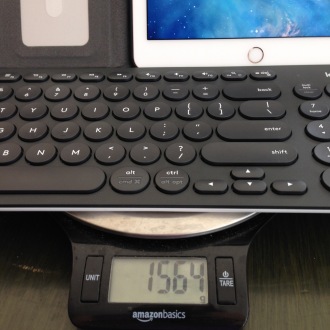 I use a Bluetooth keyboard paired with an iPad Pro as an alternative† to a weightier, bulkier, less flexible laptop. The Arteck keyboard together with my iPad weighs in at 59% of the K780 + iPad Pro combo.

Here are some more visuals to show the difference in size between my two portable input devices.

END_OF_DOCUMENT_TOKEN_TO_BE_REPLACED

If I hadn’t purchased a Bluetooth keyboard, this blog would have about 30% of its current content. My preferred portable input device is a Logitech K780 model.

I bought mine from Amazon about a year ago when I began writing regularly for my blog. I quickly realized that hand discomfort was my limiting factor for writing long form content away from my desk with an iPad. I paid $75 then; today’s price is several dollars less.

My Logitech K780 keyboard in use on a lap desk

The dedicated keys for switching almost instantaneously between three devices are a major factor in my enjoyment of this particular keyboard. Those are the three white keys at the upper left of the K780 in the photo above.

Because I experience arthritis pain and stiffness in my fingers and wrists, tapping on a touchscreen while holding a device can be difficult, excruciating, or even impossible.

If I have my keyboard out, I use it to enter even short, simple text messages into my Android Blu R1 phone. Using the Logitech K780 is that much more comfortable for me.

Slim, but for the hump

Two other functions made the K780 the best keyboard for me:

That first one won’t matter to many users. If you don’t use the number pad on your current keyboard often or ever!, then by all means choose a smaller, lighter Bluetooth keyboard for your use on the go.*

Logitech offers the K380 model which has one touch device switching, like my K780, but without the built-in stand, or the K480, with stand, but using a fussy-looking dial instead of a keystroke to change devices. I haven’t tried either of those.

The little ledge that holds a device, however, will likely appeal to many users. Imagine a small, parallelogram-shaped valley parallel to your top row of keyboard keys, and you’ll have the form of this feature on the Logitech K780. It works well, supporting even a full sized iPad without a wobble on flat surfaces.

What makes this work exceedingly well for me is the full width keyboard (remember that numeric pad!) that leaves room for an iPad Pro—inside its thin, folio style case—as well as two cell phones. Not only can I swap which device I desire to control in an instant with the press of a physical button, but I also have that same device in view without juggling electronics.

Because we’ve talked about how well I juggle these days, right? My arthritis makes me drop things frequently as well as causing pain.